Mold, long dispute with condo board keeping man out of Sandy Springs home 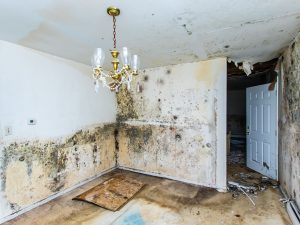 Over a decade after being forced to move out of his Sandy Springs condominium due to mold, a man is trying to move back in but can’t yet because of a legal dispute with his homeowner’s association.

Frank Thomas, who bought a unit at the Sutton Pines condos in Sandy Springs in December 1992, lived there from then through August 2007, when he was forced to move out due to mold that accumulated starting in 2003 and was caused by a water leak coming from the roof of his building. Thomas’ unit is on the second floor of a three-story building where each condo is one story and has the same floorplan.

The legal battle started in 2003, when Shirley Pruitt, the neighbor living below Thomas, said she noticed mold in her unit, he said.

“Shirley called me to ask if the contractor who was remodeling my kitchen cabinets and countertops … could come down and look at her unit,” Thomas said. “Shirley had a little mold on the master bathroom ceiling. I had ceilings (in five rooms) that had mold 100 times worse than she did.”

At that point, Thomas said he suggested he and Pruitt talk to the Sutton Pines Condominium Association’s board about the issue since it was caused by a water leak either in the unit above them or in the roof (at the time they didn’t know the origin of the leak).

“Nobody knew where it was coming from. There was never an investigation into the source of the leak,” Thomas said, citing the prerequisite procedures part of the condo association’s bylaws.

But Pruitt sued Thomas in Fulton County Magistrate Court, winning a $15,045 judgment after she asked for $22,995. Thomas said the judge, in that case, would not allow Thomas or his expert witness to testify.

In September 2004, a contractor with ERG did $2,400 worth of repairs in Pruitt’s unit to address the mold issue there and gave Thomas an estimate of $5,600 for repairs to his unit, he said. Thomas said he sent the estimate to the board but they didn’t do anything.

Thomas then sued McDonald and Sutton Pines in Fulton County Superior Court in 2004. The judge dismissed that case because his attorney did not show up, Thomas said. He then filed a writ of certiorari to appeal the case and then sued Sutton Pines, Pruitt, and McDonald in Fulton County Magistrate Court, and it was dismissed. In 2005 Thomas appealed the case to the Supreme Court of Georgia, which denied his appeal.

In 2014 he went to court again, but in Forsyth County Superior Court, after he stopped paying his condo dues following 27 months of paying them after vacating his unit. He argued he didn’t need to pay the dues because “it was apparent that the board was not going to honor their obligations under the documents, by-laws or rules and regulations.”

In 2014 three insurance companies sued Thomas in F0rsyth County Superior Court over his unit, and he countersued. In a settlement agreement, Thomas was awarded $64,000 to pay for his substitute rent and $13,000 to pay for his legal fees and the association’s legal fees and did not charge him for two or three years of the condo fees, which he stopped from November 2009 until January 2014.

“I’ve hired four or five lawyers (and) worked with six or seven contractors and one civil engineer,” said Thomas, who may represent himself in the latest case because of a dispute with his lawyer.

But since then the board has not repaired his home and allowed him to move back in. He said it started to but then ran into some problems.

“They began to but went through the process the wrong way since I never got an estimate and proposal from the condo board or agreed to repair the swaying subflooring between the units,” he said, adding since then the costs to repair his unit have gone up due to other damage caused by the leak and mold.

Going back to the original discovery of the roof leak, Thomas said the board didn’t follow its own bylaws in how it’s supposed to respond to any claims of damage to a Sutton Pines condo, adding it failed to carry out all five of the steps outlined in the bylaws regarding that subject. That includes the first step, which states, “The board shall make a prompt and timely claim with the insurance carrier(s) in the event of any loss, destruction or damage.”

Thomas said the board also ignored another step in the bylaws, which states, “Immediately after a fire or other casualty causing damage to the condominium, the board of directors shall obtain reliable and detailed estimates of the cost of repairing and restoring the structures (including any damaged unit) to a condition as that existing before.”

He also said there was no other follow-up by the board until August 2011, when the Gray Contracting Co. went to his condo and cut seven holes in his ceilings and took a hose to the roof to test it by filling it up with water. Gray’s report, Thomas said, stated, “This is a common element that must be fixed.”

Before moving out of his unit in 2007, he said he would get sick from living there and would feel better when he would visit relatives out of town. Thomas said an expert with a Ph.D. from the East Marietta Scientific Laboratory came to his home in March 2014 to test it for mold and found 5,500 and 7,600 toxic mold spores in his bedroom and his living room, respectively. According to the Health and Safety Laboratory’s website, the normal amount of mold in a home is 500 spores total.

Thomas said the board hired FireStar Co. to sanitize the mold in my condo, and Feb 2, 2014, announced his condo was clean. But 15 days later, ACT Services, an indoor air quality control company that inspected his unit Feb. 7, issued a report stating there were high levels of Chaetomium and Stachybotrys mold spores, both toxic, in his home. The report stated these spores “should not be found in a residential environment.”

Thomas, 81, is a stroke victim, has degenerative scoliosis of the spine, and walks with a cane. He said his condo association, by not allowing him to move back into his home, could be criminally charged for violating Georgia law 16-5-102.

The law in part states an individual can be fined or imprisoned for exploiting a “disabled adult, elderly person or resident” by inflicting “physical pain, physical injury, sexual abuse, mental anguish or unreasonable confinement … willfully depriv(ing them) of essential services.”

>Steven Winter, an attorney representing Sutton Pines, said the condo association is suing Thomas again because he stopped paying his monthly dues, and it won’t fix his unit until they are paid.

“The association sued Mr. Thomas many years ago to collect unpaid assessments from him,” Winter said. “Mr. Thomas brought a claim in that lawsuit against the association alleging that water was entering his unit and that he had water damage and mold. A settlement agreement was signed and entered in the case that resolved his specific claims and a separate release of ALL CLAIMS was also signed by Mr. Thomas. The association resolved the water issue, had small areas of sheetrock removed as required (from the utility closet and living room wall adjacent to the balcony door and the ceiling) and the mold remediated from those areas and received a clearance letter from a mold remediation company.”

He also said Thomas has been uncooperative in dealing with the condo association regarding his unit.
“Mr. Thomas refused to let the association enter his unit to restore the sheetrock in those areas that were removed.  Based on subsequent communications from owners living around Mr. Thomas, the association believes that Mr. Thomas has removed sheetrock and flooring from his unit and the unit has not been in a livable condition for some time. The association has again sued Mr. Thomas to collect unpaid assessments.”

1 thought on “Mold, long dispute with condo board keeping man out of Sandy Springs home”