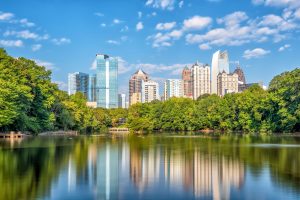 Water poured into Madrika Gray’s apartment from a busted pipe last December, ruining her furniture and puddling onto the worn tiles. Then there was mold, which grew in dark, fine-haired blots on her furniture and made her clothes smell no matter how much she washed them.

Mold grows in an air vent inside Madrika Gray’s unit at Forest Cove, near where a burst pipe in December 2017 caused a leak that has yet to be fixed. Tests at dozens of apartments there showed that their median mold spore count was double that at other locations tested by the same lab. Now Gray and her children wake up with piercing headaches. A throat and lung infection forced her to the emergency room. She blames it on mold, which continues to grow inside the drywall and through the paint on her walls, she said, but calls to management of Forest Cove apartments, city of Atlanta code enforcement, and the Fulton County Health Department have failed to fix the problem. Gray, who is visually impaired, earns too little money to move out.

“It put me into a depression stage where I felt like giving up hope,” Gray, 37, said from her apartment in southeast Atlanta’s Thomasville Heights neighborhood. “Nobody would listen.”

Tenants who find mold in their homes have no safety net in metro Atlanta and elsewhere in Georgia, placing them and their children at risk of chronic breathing problems, infections, and lost school days. Local and state government agencies lack the legal authority and funding to test the air in Gray’s apartment, much less make it healthy to breathe, an Atlanta Journal-Constitution investigation found. And while the U.S. Department of Housing and Urban Development says that housing under its programs, such as Forest Cove, must be free of mold, there are no national public health standards for mold levels.

What’s more, Georgia law gives landlords little incentive to clean up unhealthy conditions. Tenants may not withhold rent under any circumstances — even if their apartments are uninhabitable. They may only complete repairs themselves and deduct the costs from their rent.

But if Gray were a tourist staying in a hotel, health department inspectors would be required by state law to come to her aid. The Georgia Department of Public Health is responsible for ensuring safe and sanitary conditions at hotels and motels and can cite an owner for mold problems. It can even shut down hotel rooms.
“Protections for Georgia families facing unhealthy or uninhabitable housing are woefully inadequate,” said public interest lawyer Elizabeth Appley, who is advocating for legislation to improve conditions.

Experts find mold problems to be widespread in housing for lower-income residents, which is often older and in need of repairs. In Georgia, a tenant’s sole recourse is to sue for damages, but low-income tenants cannot afford to hire an attorney and test the unit.

The problem frustrates those who think that landlords that rent out unhealthy homes should be held accountable as polluters, unsanitary restaurants or other businesses that threaten the public’s health.

“Every American deserves to live in a healthy home, and this should be a national outrage that rental facilities are not kept up in a manner that ensures every child reaches their God given potential,” said David Dyjack, executive director of the National Environmental Health Association, an organization of environmental health professionals.
In theory, fixing an apartment’s mold problem should be no more difficult than making the kinds of repairs required by law to keep a unit up to code: repair the leak, use an inexpensive, widely-available air filter that can capture spores, and keep humidity low, perhaps by installing a dehumidifier.

“You have to have potable water. You have to have lighting. You have to have glass in the windows. Why can’t you have breathable air?” said Richard Johnson, a member of the state health department’s Georgia Healthy Homes Coalition, which works to improve housing conditions statewide, and founder of Air Allergen & Mold Testing, which performed indoor air quality tests at Forest Cove.

The state health department in 2013 called for developing legislation to ensure homes are healthy, citing concerns about exposure to mold contributing to asthma. But this recommendation was not enacted. Legislation introduced in the General Assembly earlier this year to create a study committee on unhealthy housing, including mold issues, did not pass.

In Clayton County, tenants complain of mold so often during eviction hearings that certain judges have announced at the beginning of court that such a claim is unlikely to help them, said Farley Ezekiel, an attorney who focuses on housing issues for the Atlanta Legal Aid Society and Equal Justice Works, a public interest law nonprofit. Residents have been told they need to have medical records, a mold test and testimony from a mold expert to win, she said.

“People will most often bring pictures. I’ve seen people bring in actual moldy items — someone who’s entire closet gets soaked and all of the sudden their clothes are moldy. I’ve never seen anyone be successful,” Ezekiel said.

In south DeKalb County, a torrent of water that gushed into Yashika Palmer’s Eagles Run apartment in April 2017 soaked the drywall so badly that mushroom-like fungi grew out of the cracks and parts of her ceiling caved in. Maintenance workers cut holes in the wall and ceiling in attempts at repairs, but failed to close them up.

Water continued to leak for months. Tests by an expert hired by DeKalb Legal Aid showed high levels of mold.

As conditions worsened, Palmer’s 17-year-old son, who is asthmatic, developed a thick cough and struggled to breathe. The child care worker paid a friend to board him. After calls to code enforcement and pressure from the federal Housing Choice Voucher Program, which subsidized her rent, failed to convince building owners to make fixes, she moved into a motel that cost her $350 per week.

“The reason why landlords are not making repairs is that it’s cheaper for them not to make repairs,” said Atlanta Legal Aid Society attorney Lindsey Siegel, who is suing Eagles Run on Palmer’s behalf. “We have to change that equation for them.”

Calls and emails to an attorney representing Eagles Run were not returned.

At Forest Cove, as months went by without the problems in Gray’s apartment being addressed, she and her three children moved to a motel for seven weeks. When they could no longer afford the motel, they shared a two-bedroom, one-bath apartment with four relatives until the overcrowding created too much tension. By April, she was back in her moldy apartment, tossing out her furniture and wiping down the walls with bleach.

“I had no where else to go,” Gray said. A friend fixed some of the leaks, and she is now working with other tenants trying to improve conditions at the complex.

Madrika Gray said she called apartment managers, city code enforcement, the health department and others to alert them of the mold problem in her Forest Cove apartment, but fixes have yet to be made. Local and state law is of little help, and 2013 Georgia Department of Public Health recommendations that laws be drafted to assist residents were not implemented. BOB ANDRES / BANDRES@AJC.COM
Decades of neglect
Decades of neglect by landlords have made Forest Cove a haven for mold, which grows in warm, humid environments. Air-conditioning regularly breaks down, while chronic plumbing failures and roof leafs have left ceilings and floors sodden and buckling. Residents complain that maintenance workers’ standard fix is to spray paint over the mold.

Conditions are so bad that the Atlanta Volunteer Lawyers Foundation opened up an office at a nearby school and commissioned Air Allergen & Mold Testing to assess 63 of Forest Cove’s 396 units. The organization found that the median spore count was double that of some 5,800 locations across the metro area that were tested using the same methodology. All but three air filters it inspected were of such poor quality they could not clean the air of mold and other key pollutants.

Meetings between tenants, the lawyers’ foundation, apartment managers, HUD officials and National Housing Compliance, a Tucker nonprofit hired by HUD to oversee compliance and take calls from tenants, have made little progress. Unsafe conditions at complex owner Global Ministries Foundation’s other low-income, federally subsidized properties prompted HUD to pressure it into selling its portfolio, leaving Forest Cove in limbo until it is sold.

Forest Cove Apartments in southeast Atlanta’s Thomasville Heights neighborhood has become a haven for mold.
Forest Cove’s potential buyer, a subsidiary of Cleveland, Ohio-based The Millennia Companies, took over management when a prior company quit. It cannot start a planned $30 million renovation until the sale is completed, said Jeff Crossman, a company attorney.

“We got put into a difficult position, managing a property we don’t own,” Crossman said. The company is not aware of any requests for repairs that have not been addressed, he said. National Housing Compliance isn’t either, its chief executive officer Valarie Todaro said.

Richard Hamlet, president and chief executive officer of Global Ministries, declined an interview request through a spokeswoman. HUD officials also declined interview requests, but said in a written statement that owners and managers put in place a remediation plan after inspectors found mold in certain units.

“HUD intends to obtain confirmation that the plan has been fully implemented,” the federal agency said in a written statement. The agency will look into mold reports at units that were not part of the inspection, it also said.

Gray worries that help will never come. Managers have promise renovations before during her 12 years at Forest Cove. Nowadays, with much of her furniture ruined, she spends her nights in a sleeping bag, next to a queen mattress she bought so her 11-year-old twin sons would not have to sleep on the floor.